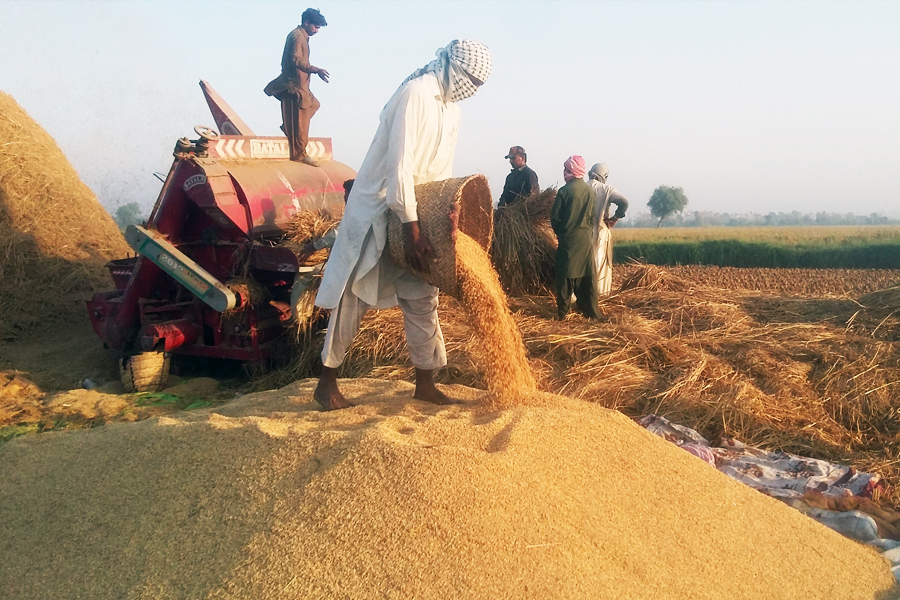 FOR Ali Baksh, a 55-year-old farmer in Sindh, tending the land is a special form of worship. It takes devotion, consistency and a lot of soul. He’s been sowing and harvesting crop since he was a child; after dropping out of school in the fifth grade, he would walk to the fields leading his near-blind father, also a farmer, to check on pests or sprinkle fertiliser.

Baksh, who doesn’t own any land, farms a total of 17 acres for three different landowners, planting rice and wheat cyclically and is the third generation in his family to be working the same fields.

The way the traditional system works is Baksh pays for the seed, the ploughing of the land by tractor, the cost of threshing and any labour used for planting or harvesting.

Anxious thoughts never leave the man working in the fields.

The landowner only shares half the cost of fertiliser and pesticide. When the produce is harvested, it’s split half and half.

When farmers can’t afford to buy the seed or pay for the tractor, they ask the landlord to pay and deduct the cost from the final division of crop. Often, the landlord charges interest on the funds provided for inputs; making it even harder for the farmer to save anything.

“This is how the landlords mix poison in our honest earnings,” Baksh says, wearing a red-and-white chequered handkerchief on his head.

As per tradition, farmers also have to give away some produce — one-and-a-half maunds to the kamdar, the landlord’s caretaker, and various amounts to local pirs and village children who visit the fields. The farmer does this with a measure of fear: if he doesn’t appease the pir, he will get a bad name, and if he does, he risks the landowner’s wrath and accusations of theft.

When the last wheat crop was harvested in May, Baksh ended up Rs55,000 in debt because of the interest payments and all he was left with was some hay which he kept for his livestock.

Last year’s rice season was better where Baksh and his four sons who work the land with him, saved 100 maunds of rice and Rs200,000.

Since families are large in villages, farmers aim to keep as much of the rice crop as possible to use at home throughout the year and the cash goes towards household expenses and for costs relating to the next plantation. If they’re left with enough, they’ll try to buy a buffalo or a few goats as assets.

Baksh says he’s lucky to have at least one kind-hearted landlord who doesn’t charge interest and also helps him in times of need. Most of the time, he says, farmers hold their breath for the five minutes they have to appear before the landlord, afraid of being scoffed at.

“In the days gone by, landlords used to treat farmers as their own children,” Baksh says. “Today, most of them treat us as sworn enemies.”

Baksh starts his day at 6am after a breakfast of chapatti made out of rice flour and potatoes. Then, he works till 11am. When the day starts to heat up, with temperatures easily reaching the late 40s, he spreads some hay under a tree in the field and tries to rest. Most of the time, he isn’t able to nap since he’s woken up by ant bites or by squirrels and birds eating his seed.

After working through the evening, he heads home, carrying anxious thoughts with him about rats that may destroy his hard work.

A farmer’s two big enemies are snakes and thieves, Baksh says. He’s had several encounters with snakes while digging in his fields and is particularly anxious about a three-footer he hasn’t been able to kill in five years.

Thieves plotting attacks usually use fields especially at night to approach their targets and when they see farmers, out of fear of being identified, they rob their clothes and beat them up. Of course, there’s also constant worry about turns in the weather that could destroy crops entirely.

These days is rice planting season: Baksh is watching over his seed for the 23 days it takes to mature. Then he will hire a few dozen workers, paying them Rs120 a day each, and spend about two weeks planting on all the land he tends.

The next two-and-a-half months, he’ll care for the paddy fields as parents rear a child, he says. Finally it’ll be time to harvest the rice crop which will take another two weeks to cut and another eight days to gather the produce up into heaps. Then, one night a thresher machine will be hired along with workers to separate the rice from the waste.

Baksh, a cardiac patient, says his back and legs have started to ache. Yet, he says, there’s no better profession than the blessed work of growing the sustenance others will eat.