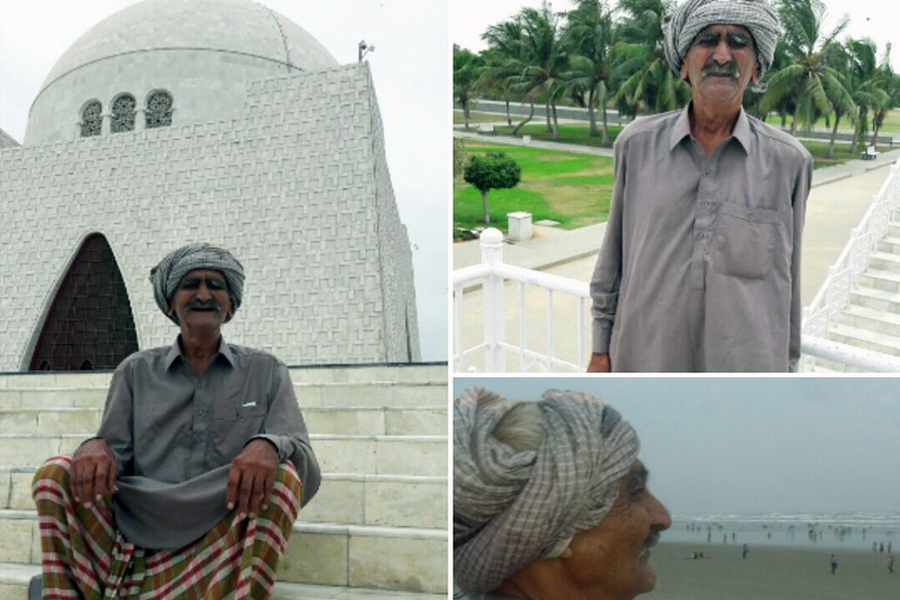 GHULAM Rasool, a 72-year-old farmer from Larkana, was touring Karachi for the very first time. He was in town for medical treatment for a heart condition. But while he waited to get an appointment for an angiography, he earnestly asked to be taken to the Quaid’s mausoleum. He prepared carefully for the visit by putting on a freshly washed dhoti, smoothing down his kurta and wrapping a chequered cloth into a turban.

As he entered the vast grounds and his eyes fell upon the domed white structure, tears instantly wet his wrinkled cheeks; he held his heart with one hand and with the other offered a trembling salute to the founder of the nation. He had waited a long time to do this.

This elderly villager remembers Pakistan soon after Partition. He grew up hearing memories from his elder brothers about how Pakistan was formed. Jinnah, Ghulam Rasool said, received such honour in life and after death because of his industrious nature.

The farmer has had a difficult life. The only time of plenty he remembers is as a child. He was the youngest of two half-sisters and five brothers and went to school till class four.

Ghulam Rasool had waited a long time to pay homage to the Quaid.

His father had a small landholding and some livestock and used to distribute wheat and clothes among the poor in the village. When his father passed away and the brothers split up, Ghulam Rasool started working as a labourer at a rice mill at the age of 20. He would transport 120-kilogram sacks of rice on his shoulder one after another for eight hours a day for which he would be paid Rs1.25.

After nearly a decade of this hard labour, Ghulam Rasool turned to farming, working the fields of landlords in the area and earning a share of the rice or wheat crop. He remembers several continuous years when pest attacks would destroy crops, leaving him with a burden of debt he couldn’t pay. He recalls years of hunger when he couldn’t even think about improving the structure of his home which was made of hay, tree branches and old rags.

Yet he always persevered believing strongly in the virtue of industry. The difference between those days and today, according to Ghulam Rasool, is that if you work hard today, you won’t go hungry. But the ethic of hard work, he says, has slipped away as young men while away most of their time watching films at teashops or squandering away money at gambling dens.

After the farmer got his three daughters married, he struggled to send his one son overseas to improve his prospects. The young man found work at a factory in Dubai but within months fell victim to a workplace accident that tore ligaments and arteries in his left arm. When he sought hospital care, he was reported to the authorities for his illegal status and put in jail. There, he received no medical attention and eventually lost use of his arm and was sent back home. Ghulam Rasool received his son with a heavy heart and over the next several months helped him set up a small confectionery and milk shop so he could earn something of a living. His efforts and struggle haven’t ended yet.

“My only aspiration in life is that the next generation doesn’t have the same troubles as we did,” he said. “That’s why I keep telling them to work hard. The rest isn’t in our hands. Our fate is written right on our foreheads. And that’s why some of us spend our entire lives struggling and some live lives of comfort.”

Ghulam Rasool’s sole source of entertainment and his highlight of the day is reading the daily Sindhi newspaper. After spending the early morning selling milk and yoghurt at a street corner in the village, he walks over to the community library and spends a good few hours there, reading the entire paper and avidly discussing politics with his fellow readers.

The context of the discussion is always the state of development in Pakistan since 1947 which, he says, could have been so much better if our leaders had retained Jinnah’s habits of working hard.

Ghulam Rasool’s heart condition doesn’t really have a cure. He will be on lifetime medication. But before leaving Karachi, he wanted to fulfil two lifelong desires. One is a visit to the zoo; where he chuckled heartily at a gorilla leaping around in his cage and a elephant shaking leaves of a tree. And then he made a first-in-a-lifetime trip to the seaside. His innocent bewilderment was a wonder to watch. He said nothing. He just stared at the waves, looked right and left and smiled in amusement at the crabs building sand houses.

This is a kingdom all on its own, Ghulam Rasool said. “I spent seven decades wondering what the sea would be like. It’s unending, wonderful, simply baffling. What wonders there are in the world.”