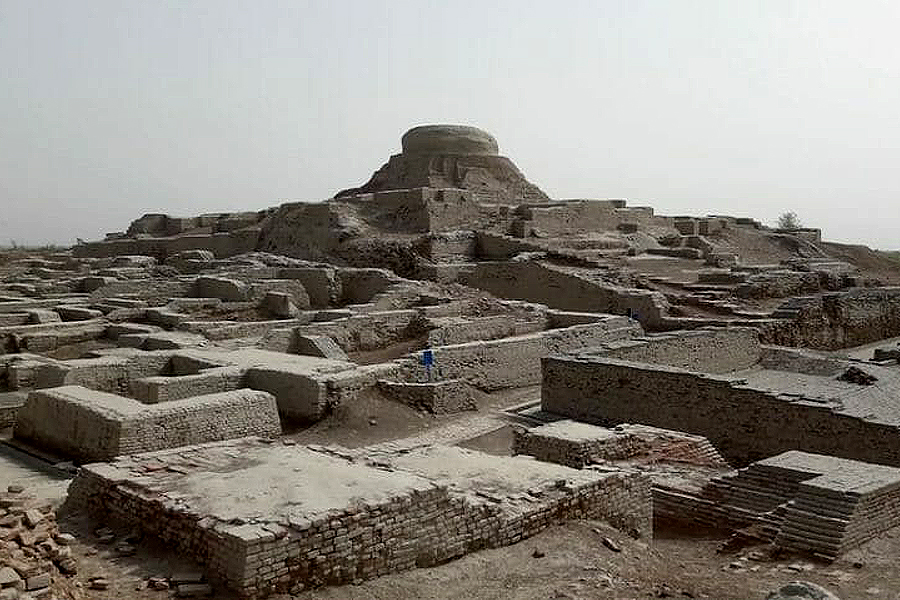 Truthdig is proud to present this article as part of its Global Voices: Truthdig Women Reporting, a series from a network of female correspondents around the world who are dedicated to pursuing truth within their countries and elsewhere.

The long road to Moenjodaro, a World Heritage site in southern Pakistan, is lined with smoking brick kilns and fields of ripened wheat. In one patch along the route, women pick tomatoes, tossing them onto small heaps. A little farther, hundreds of men congregate at a livestock market, tugging along their goats and buffaloes. A wiry old man sells petrol in Pepsi bottles lined up on a wooden bench. A young boy sets up his dusty cigarette stand for the day. Closer to the ruins, a group of children who should be in school are playing cricket in a barren field.

The ruins of the ancient city of Moenjodaro represent the metropolis of the Indus civilization that flourished along the Indus River between 2,500 and 1,500 B.C. The advanced urban society benefited from rich river floodplains and trade with the civilizations of Mesopotamia. Moenjodaro, a renowned brick-making center, included a great public bath, wells, covered drains and soak pits for the disposal of sewage. Every house appears to have had a bathing area, a toilet and a drainage system, and the ruins are framed by a grand citadel.

The ruins of the city of Moenjodaro represent the advanced urban society that flourished along the Indus River between 2500 and 1500 B.C. Critics accuse the Pakistani government of neglecting the historic site and the surrounding villages.

The city’s grid structure and public facilities speak of an organized and dynamic society. “[Moenjodaro] is an architectural memory to remind us of a rich and diverse cultural past beyond the aggravations of [today’s] Pakistan,” says Karachi architect Zain Mustafa. “It’s a validation of the value of our geographic role.”

Brick making is still an industry in the area, but beyond that, little remains of the heritage of that advanced Indus civilization. Today, villages near the ruins have overflowing open drains leading to huge sewage ponds that breed mosquitoes and disease. Residents say the Pakistani government has promised to improve sanitation in the impoverished villages around the historic site, but the promises have been broken. Critics also say the site itself isn’t being adequately protected and maintained.

Archaeologists first visited Moenjodaro, which means “mound of the dead,” in 1911, and excavations took place from 1920 to 1931, followed by subsequent digs in 1950 and 1964. The ruins are spread over 555 acres, and only about 10 percent of the civilization’s area has been excavated.

At the main entrance to the ruins, a chair tied to a table with a rope serves as a ticket counter. Inside the grounds, a man wearing a striped turban squats under a tree, waiting for customers to buy spiced chickpeas out of his steel platter. The pathways are strewn with empty candy wrappers, used water bottles, cigarette butts and dried leaves. Grass is overgrown, and paint is peeling from the benches. There are no visitors on this warm May morning. A dove’s cry rings out across the ruins.

“Folklore has it that doves call out like this in distress when they end up in barren, desolate places,” says Rahib Shah, a sculpture artist who specializes in creating replicas of relics excavated in Moenjodaro.

The visitors’ book at the museum in the ruins shows that only 50 people toured the area during the first three months of this year, including visitors from abroad. As the day wears on, a small group of schoolchildren troop through the gates with two teachers. The ruins haven’t been adequately promoted by the government as a historical tourism site, and there are no hotels or other facilities for visitors in the area. Also, Pakistan’s image in the international media as a hub of terrorism has led to a downturn in tourism at large over the last several years.

People who live near the ruins point out the vast discrepancy between the ancient civilization and the area at present. “It is remarkable to note that all those centuries ago, there were limestone paved drains and dustbins, and houses were made with windows and cross ventilation,” says Mohammad Ismail, a tour guide at the ruins. “Today, the villages in this immediate area have nothing, and the only reason is a lack of proper governance.”

Dhandh, about a half mile from the ruins, is the closest village to Moenjodaro and is home to 65 families. Ali Akbar, who sells shaved ice topped with syrup, says most residents live in abject poverty. “We live right in Moenjodaro, a site known all over the world, but not a single facility has been given to us,” he says. “There are no drains, no proper roads, no waste disposal.”

A man draws water from one of a few scattered hand pumps in Dhandh, the village closest to the ruins of Moenjodaro. In contrast, the ancient city was renowned for its advanced waterworks.

As in other derelict villages across Pakistan’s southern province of Sindh, in Dhandh the inhabitants live in mud huts held up by tree branches and draw water from a few scattered hand pumps. For most residents, toilets are little more than a hole in the ground. The government once planned to transform Dhandh into a model village because of its proximity to the ruins, but the plan was never executed.

“In 1922, our elders helped excavate the site, and my father was a cook for John Marshall [supervisor of the excavation for the Archaeological Survey of India],” says Saddardin Solgani, who worked at the ruins until he retired in 2015. “We were born here and have grown old here, but we haven’t got anything.”

Rehana, a mother of six, whose husband is a construction worker, ducks to protect the baby on her hip from a bamboo stick that comes loose from her roof and comes crashing down.

“We see the influential politicians only during voting season when they come to make promises they never keep,” she says. “This room of ours collapsed last year, and we rebuilt it to the extent we could, but when it rains all the water is inside. We don’t have a toilet, a kitchen or piped water.”

The Pakistan Peoples Party of slain Prime Minister Benazir Bhutto has ruled Sindh province for the last 10 years, but the government has directed scant attention or resources toward the region’s most fundamental human needs. When the world’s sixth most populous country went to the polls in July, critics of Bhutto’s party said the lack of development in poverty-stricken areas would hurt its prospects. Yet, the party won 78 of the 130 lawmaker seats in the provincial vote, according to GEO News.

The government also has been criticized for failing to adequately preserve the historic site of Moenjodaro.

In 2014, the provincial government came under fire when it held a cultural festival on the fragile ruins. Hundreds attended, and scaffolding was put up to accommodate a large crowd for dancing, fireworks and a laser show. (A court order required “extreme care” to be taken during preparations for the event, and no damage was reported.)

Environmental threats to the area include saline seepage from the underground water table—salinity that is causing the brickwork to crumble. “A century of irrigating land without proper drainage is turning the Indus basin into a salty wasteland,” according to the Christian Science Monitor. Tube wells have been installed to protect the brick ruins, but constantly running the pumps is prohibitively expensive so they’re often turned off.

Flooding from the nearby Indus River dam is also an ongoing problem. Some berms and channels were designed to divert river water from the ruins during flooding, but all conservation work at Moenjodaro remains sporadic due to lack of funding.

Other issues include the stress of extreme heat. Temperatures sometimes exceed 122 degrees Fahrenheit, which can lead to crumbling and deformation of the structures. Because there currently is no way to protect the ruins from heat, some archeologists suggest keeping the uncovered parts of Moenjodaro buried until solutions are found.

Moenjodaro included covered drains (pictured), as well as a great public bath, a well and soak pits for the disposal of sewage.

Properly maintaining Moenjodaro is critical for cultural and historical reasons, according to architectural experts.

“The most important thing about the Indus civilization was its governance systems that made it possible to have an identical system from Gujarat [now a state in western India] to the Jumna [a tributary of the Ganges in northern India],” says Arif Hasan, a Karachi-based architect and planner who specializes in heritage preservation and development. “Then there was the high quality of the brickwork [and] climate-friendly architecture of small windows and courtyards for ventilation. The population at that time was so small [that] sanitation was easy. The same manner of disposal cannot be applied today.”

Architect Mustafa leads educational tours to heritage sites across Pakistan and has taken several groups to Moenjodaro. “It is a fantastic study of urban design, how cities were and what we can learn from them to do or not to do,” Mustafa says.

Today’s governmental bodies can benefit from these lessons. Moenjodaro offers the clearest guidance on organized structure, basic amenities for the public and respect for health and hygiene—vital elements missing in the immediate surrounding area. All Pakistan needs to do is start learning.