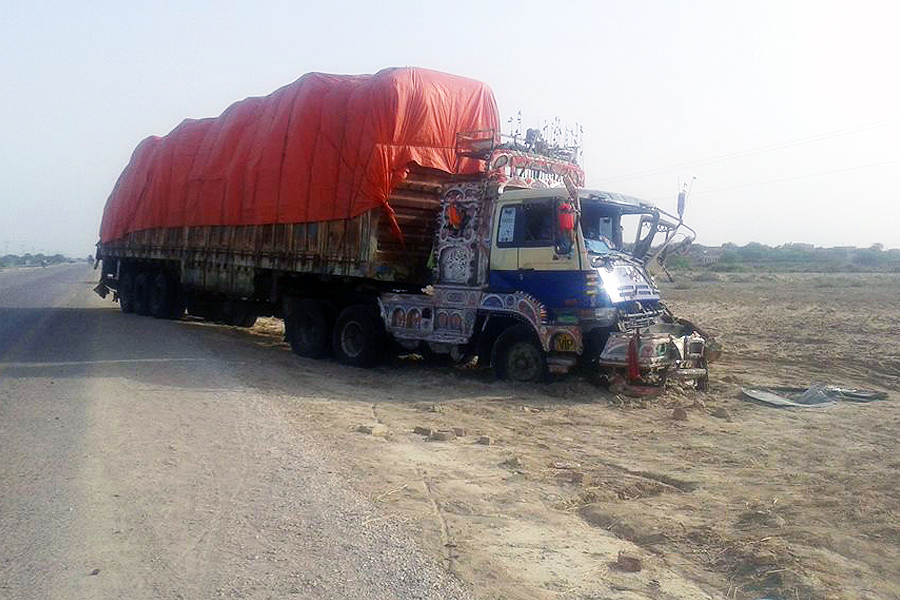 YOU may have missed the report in this newspaper from Aug 12 about a road traffic accident near the town of Rato Dero, about 30 kilometres northeast from Larkana city. It was a tiny story, less than 100 words that simply said two people, Hubdar Kalhoro and Gulzar Hullio, were killed.

Let me tell you a little more about this accident. On that early Friday (Aug 11) morning, these two daily wagers briskly washed up, climbed onto their employer’s tractor and headed out of their village towards a nearby brick kiln. They were going to collect bricks for Gulzar’s sister who was building a toilet at home. She had been pestering her brother to bring her the bricks and excited that morning, she pleaded with him to have a cup of tea before he left. But Gulzar didn’t want to keep Hubdar waiting so he rushed off, promising to have her tea later that day.

The two young men stopped just outside their village at a tea shop, quickly downed two cups, and then headed out to the highway. A few kilometres down the road, the tractor started giving trouble so Hubdar, who was driving, parked it by the curb and slid underneath to check out the problem. Gulzar was standing atop the trolley in which he was to load the bricks. Eyewitnesses reported that a trailer packed high with goods was speeding down the road and rammed straight into the parked tractor. The trailer ran off the road, its windscreen smashed and the tractor went somersaulting landing several feet away. Gulzar’s face was crushed and he died on the spot. Hubdar, who was bleeding profusely, died soon after at hospital. Police took the driver into custody.

Now, let me tell you a little about these two young men. Gulzar, 32, never went to school. He was five when his father died and he was given the responsibility of taking care of the buffalo his family reared for a landlord. Gulzar spent his childhood, teenage years and 20s in hard labour wherever he could find it; he worked the rice thresher machine during the harvesting season, he spent year after year planting rice and wheat and he worked on a tractor, loading and unloading bricks, cement or sand.

An entire village mourns the death of two daily wagers.

Gulzar had a comical swing to his gait and his fellow villagers were accustomed to seeing him caked in mud from head to toe every evening as he walked home after a long day, his threadbare dhoti swinging above his ankles. His nightly routine was to come home and put whatever he earned in his elderly mother’s fist; usually about Rs250. His mother got him married five months ago and his wife is pregnant with their first child.

Hubdar Kalhoro, about 28, woke early that day, went into the fields to chop grass for his buffalo and then repeatedly surprised his wife with hugs. She was left wondering why he seemed extra happy. He was a father to four daughters and was very keen to have a son after having lost three baby boys. When he found out that his wife was pregnant with a girl, he celebrated and told everyone he was happy with God’s will.

Hubdar’s father transports goods on a donkey cart in the area to make a living. The son, followed along at a very young age, after quitting primary school. He worked on construction sites, spent summers in Sukkur working on date plantations and helped his family with the seasonal planting and harvesting. When that work wasn’t available, he would work as a loader on a tractor and learned how to drive. After a long day he’d come home and put his two-year-old daughter to sleep on his stomach. This, he said, would erase the entire day’s exhaustion.

The accident was settled through a panchayat decision in which local politically influential landlords decreed that the trailer driver would pay each family Rs700,000. With that, the driver was set free and he came and condoled with the families. Gulzar and Hubdar’s entire village showed up at their funerals. There was no space to sit or stand in the muddy lanes where they lived. And no dry eye in the crowd.

The report of their death ran with the headline: ‘Two killed in road accident’. Behind those neutral words, there are dozens of human hearts, now torn to shreds. Gulzar’s sister, waiting with tea-cup in hand, can’t stop cursing herself for asking her brother for bricks. His young wife is agonising over what she will tell their unborn child. And their aged mother has crumpled into a corner. Hubdar’s wife keeps lamenting she didn’t ask her husband to stay home that day when she noticed how happy he was. Their children have gone hollow and silent. Noisy, bustling neighbourhood lanes have fallen still. The entire village is deep in mourning.