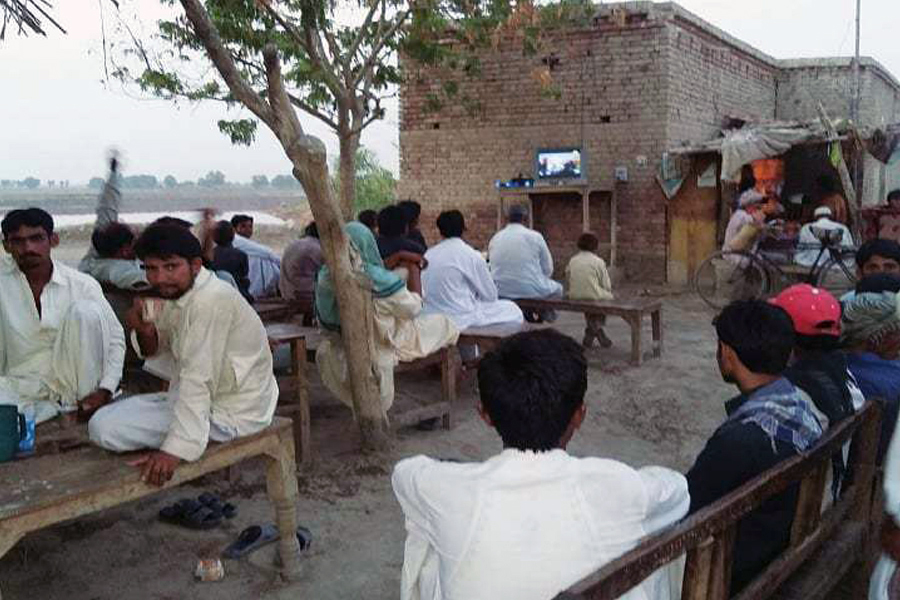 THROUGHOUT Sindh’s villages and small trading towns, in its chaotic cities and roadside hamlets, the ubiquitous tea shop is a permanent feature. These open-air stalls, or hotels as they’re known locally, are all the same. They feature a television, several rickety wooden benches, and a large steel saucepan bubbling with fresh, sweet tea.

From dawn till past midnight, scores of men are seen hunched on the benches or loitering nearby, absorbed in the movie playing on the TV screen or engrossed in conversation with friends, tea cup in hand. Behind the saucepan, the hotel owner is constantly brewing a fresh batch and often has a young helper who offers customers a cold drink, a bowl of ice cream or a cup of chicken soup in the winter. Nearby, entrepreneurs have set up confectionery and cigarette shops or stalls selling snacks to take advantage of the frequency of people.

When I first started observing this exclusive men’s club, these tea shops appeared to be a social scourge; a place where men while away the entire day neither seeking labour, nor spending time with their families or performing any community responsibilities. When I probed deeper, visiting several of these tea shops and speaking with their customers, I found out that there are three major types of people who frequent these places.

First are those who go solely to watch films in the absence of other entertainment avenues in their area. Second, are customers who seek relaxation and socialisation with friends after a long day at work. And then there are those who are unemployed and use the tea shops as a way to kill time.

Sindh’s tea shops came up in the 1970s and ‘80s as villages began getting access to electricity. Later, when power outages became frequent, hotel owners bought generators to keep their business running. These tea shops partly replaced the function of the autaq — or guest house — where male members of the community gather to discuss issues. Earlier, these guest houses were large open spaces with shady trees and plenty of charpoys to accommodate visitors. Later, most autaqs became more exclusive in nature — for friends and male relatives to gather or for visitors to rest. They no longer served the function of a place to gather and socialise, a gap filled by the tea shops.

“These tea hotels have a special place in Sindh’s culture and serve the purpose of both entertainment and passing time,’’ says Mazhar Soomro, whose father started a hotel in a village outside Larkana 30 years ago. “Initially movies were played on VCRs and later cable TV and DVD players were added.”

Soomro’s hotel has an indoor portion where he runs sports channels on one TV and news or movies on another. His customers regularly bet on cricket matches or wrestling games and he broadcasts American and Indian action movies, selling about 200 cups a day. Like other tea shops, he offers a full cup — four inches high — for twenty rupees and a half cup for ten rupees. His customers have to order something to sit in the hotel; if they don’t they’re offered a glass of water and politely asked to leave.

A major group of customers is the educated youth. Young men who have cleared intermediate exams spend all day at the tea shops, running up debt since they have nothing to pay for the tea with. They’re unwilling to take on labour and unable to get jobs so they take refuge at the hotels to avoid criticism at home.

“These young think they are now above labour having achieved an education,” says Soomro of his customers. “I often tell them if they got up and went out they would at least earn three hundred rupees a day in daily wages.”

Zakir Hussain, 35, has spent all his conscious years at the tea shop.

“When I was a child, I would come here straight from school, still carrying my bag of books, and watch movies till evening and then go home,” he says. “Then, I spent many long years in unemployment so I took to waking up late, heading out to the tea shop and spending all day there. After all, I had to find a way to get through the day. I have seen at least 8,000 films since my childhood.”

Yet, the tea shops also serve socially positive purposes. Farmers heading to work before dawn have a place to get a cup of tea before starting the day since milk is usually available at home later in the morning. People gather there after work and talk about the day’s events and share news and information from the area.

Additionally, in keeping with Sindh’s great tradition of hospitality, whenever guests arrive from another village or town, it’s mandatory to take them on a visit to the tea shop to show them the local area and introduce them to friends and villagers.

Still, some elderly members of the community scoff at these hotels as nothing but a place of social nuisance. “Benefit? What benefit? These places are nothing but a waste of time,” says Ghulam Rasool, a 75-year-old village resident. “These are just dens for useless people to become even more useless.”