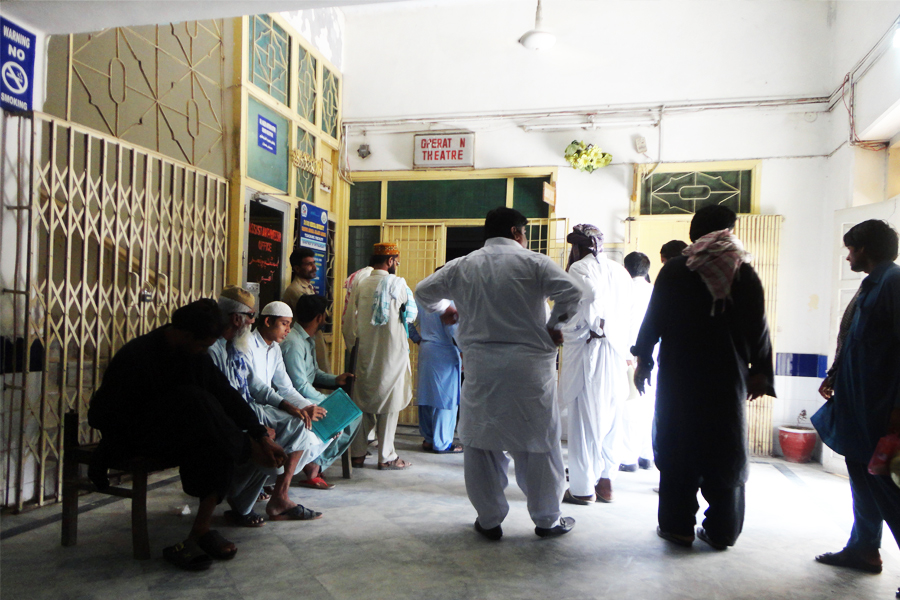 NADYA is a frail, frightened 15-year-old whose eyes brim over with tears every few minutes. Unlike most girls her age, a new brightly coloured dress doesn’t make her smile. The only thing she asks is if she will ever get better.

This delicate girl has a congenital cardiac condition known as Tetralogy of Fallot which requires total heart repair surgery. Since childhood she would frequently faint while playing and go blue in the face and breathless. In their two-room rented house located in a muddy, overcrowded lane in Shikarpur city, Nadya’s parents are a picture of exhaustion and worry.

Muhabbat Ali, probably in his sixties, is shaky and hunched over from years of struggling to care for his family from the meagre earnings of a barber. The mother is pensive but forces a weak smile when the need arises. Their three eldest sons have also been trained as barbers and the men spend the day working at a shop in the city.

The family left their village of Chodhyo Sadayo in Shikarpur district in search of work and have spent years living on rent, their personal possessions limited to a few worn-out charpais, a rusty cupboard and a few clothes. The eldest daughter is wheelchair-bound having been afflicted with polio in both legs and one arm when she was six months old. Another daughter sits by Nadya’s bed stroking her forehead and reciting prayers for her sister’s health.

Children across Sindh are victims of congenital heart disease.

Muhabbat has spent his fatherhood going back and forth from the hospital. He lost his fourth daughter at the age of 18 to the same condition Nadya has. He took that child from one hospital to another, took loans worth thousands of rupees to pay for medication and travelled to Karachi several times for treatment but gave up when the National Institute of Cardiovascular Diseases asked for Rs100,000 for surgery. Two years ago, the young girl lost her struggle at a small hospital in Sukkur.

This father, already paranoid and nervous, became even more wary of life. In the absence of family, social or state support, he spends every waking moment bound in fear. The woes of three daughters have eaten away at his heart. Nadya herself remembers little from her childhood other than visits to the hospital surrounded by her parents and brothers. Still, she refused to give up on schooling and despite missing exams due to illness, she would read and write at home. She’s made her way to class 9 and says if life gives her a chance, she wants to become a heart doctor.

Nadya’s father, although worn out, aged and sick, didn’t give up on his daughter. Nearly every day, he would tuck her thick medical file under his arm and head out into the scorching heat in search of help. He would plead with doctors, borrow money from wherever he could and travel to hospitals in big cities, navigating his way through the ruthless and cumbersome healthcare system. He would talk about his daughter with everyone he met; acquaintances, customers at the barber shop and fellow travellers. And he would follow every lead he got, no matter how remote. He heaped upon his heart every rejection, every blank stare from across a hospital counter, every disappointment.

His solitary struggle paid off. Eventually, a milk shop worker mentioned a non-government organisation that helps children afflicted by heart disease. Muhabbat picked up the trail, got back on public wagons and travelled in search of help. His daughter was successfully operated at Aga Khan University Hospital in Karachi and is now recuperating back home in Shikarpur.

Children across Sindh are victims of congenital heart disease and not all of them are as fortunate. Marriages among blood relations contribute to the high incidence, and other factors such as genetics and infections during pregnancy are also responsible, according to Dr Mehnaz Atiq, pediatric cardiologist at Aga Khan University Hospital. Most cases, however, are ‘chance’, she says. The state-run NICVD also handles these patients but surgery is not inexpensive there either.

After a childhood of suffering, Nadya, whose parents are not related to each other, got lucky; but her good fortune was her father’s relentless spirit. Every parent does what they can; braving government hospitals, being looted by fraudulent faith-healers and burying themselves in debt. More often than not though, families in remote villages and shantytowns, never even get an accurate diagnosis let alone an avenue for treatment.

The government of Sindh must attend to this urgent problem. To start with, dispensaries can conduct awareness campaigns so that families are equipped to recognise the symptoms in their children on time. Then, taluka and district level hospitals should develop an easy referral mechanism whereby these children are sent directly to facilities where surgery is available. And, of course, any efforts to make such operations low-cost and more widely available would be a major contribution.