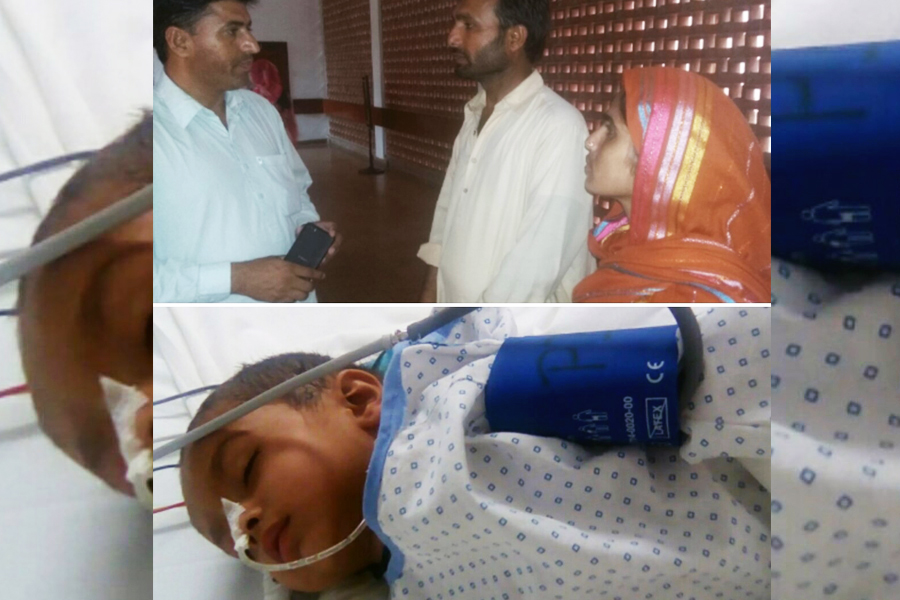 UNTIL 2015, Abid Bhutto and his wife Jannat were living a happy life with their four children and extended family. Jannat would spend her days busy with housework and caring for their two daughters and two sons in their village home in Goth Mewo Khan Bhutto in Kashmore district. Abid lived in Karachi with his three brothers, all working as labourers at Port Qasim and visiting home every few months.

In October that year, their youngest son Ahad, just over a year old, fell ill. He became inactive and stopped eating and drinking. Abid took the child to a private clinic in the nearby town. When that didn’t help, he went to Kandhkot and consulted doctors. Ahad wasn’t improving so Abid went further to Sukkur where his child was admitted to a private hospital for eight days. The facility cost over Rs1,200 a day but Abid wasn’t able to get a diagnosis.

When he ran out of money, he headed home. When the van he was travelling in was crossing through Shikarpur, Ahad appeared to have passed out. Abid shouted for help. The van stopped and sent him to the local government hospital in a rickshaw. There the child received some emergency care and was put on oxygen. Abid was advised to go to Larkana. He arranged for an ambulance and travelled to Larkana where a paediatrician at a private clinic said the child had contracted meningitis which had resulted in the collection of fluid in his spinal cord area and which was removed. The father was advised to see a neuro-surgeon because fluid had accumulated in the brain.

By now, Abid was Rs60,000 in debt; equivalent to four months of his full salary. He had no choice but to borrow from loan sharks; on every Rs30,000 he borrowed, he was obligated to pay Rs20,000. On Nov 29, Abid finally decided to head to Karachi. He took his son to the National Institute of Child Health where he was admitted. Four days later, he was referred to Jinnah Postgraduate Medical Centre where he underwent a shunt procedure — the placement of a tube in the brain to help drain fluid. Ahad remained there for two months.

The desperation of Abid and Jannat is not uncommon in rural Sindh.

In December, the worn-out couple took their child home but a month later they were back in Karachi; Ahad had fallen ill again. The NICH advised the parents to seek help from a neurosurgeon and after looking at a couple of private clinics, they went to the Aga Khan hospital where fluid was drained from Ahad’s brain through surgery. Despite help from the hospital’s welfare department, Abid had to take more loans to pay for expensive tests etc. When the child was discharged, Abid still had an outstanding bill of Rs237,000.

Six months later, Ahad was sick again. The parents borrowed more money and travelled back to Karachi. There, in the middle of the open-air waiting area at Aga Khan Hospital, Jannat stood helplessly looking at every face around her as Ahad lay lifeless in her arms. Abid, meanwhile, was desperately seeking admission for his child and explaining why his previous bill was still unpaid.

Once Ahad was admitted, he underwent a procedure to drain fluid from the brain but his condition didn’t improve. Doctors decided on major surgery to remove a benign tumour; the prognosis was said to be good. The cost was estimated at Rs900,000; Abid received help from the welfare department and a few benefactors and surgery took place. Three days later, Ahad passed away in the intensive care unit, unable to come off the ventilator.

This time, Abid and Jannat returned home with a corpse draped in a white sheet. Their struggle was over. And so was their hope. Ahad’s grandmother lost her favourite grand­child and couldn’t get over the loss. The child’s siblings and cousins became withdrawn. The noisy household fell quiet.

Abid still hasn’t returned to work, unable to come to terms with his grief. He is exhausted, angry and empty. He is also Rs300,000 in debt. “I went all over Sindh, I left no option unexplored,’’ the young father says. “But I lost my child and no one found a cure for me. Who shall I ask questions of?”

Parents all over rural Sindh will identify with Abid and Jannat’s heartbreaking ordeal. When children fall ill, mothers and fathers start with local clinics, move on to district hospitals, then to bigger cities and eventually make it to Karachi. If they are lucky, they will arrive at the right place in time to save their child’s life, though will undoubtedly end up heavily in debt. But many will suffer the fate of Abid and Jannat — sparing no effort but not receiving the appropriate guidance in a timely fashion. Those parents are then left forever wondering what they could have done differently or who they will turn to if another child falls sick.