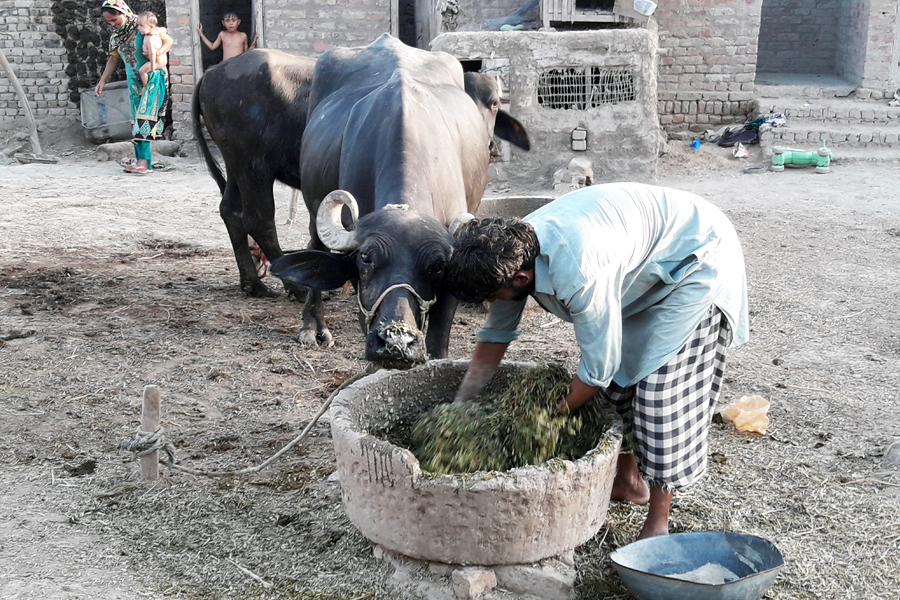 EID-UL-AZHA is coming up soon. Most people are busy considering what sacrificial animal to buy and what delicacies to prepare on the big day. Gada Hussain, a 22-year-old farmer in upper Sindh, is anxiously wondering whether he’ll get to spend the day with his family like everyone else. Normally, he misses all the special holidays.

The night before Eid-ul-Fitr a couple of months ago, Gada received a message from the landlord whose three acres he farms, to arrive at his guesthouse at sunrise. When he got there, he was ordered to clean the entire guesthouse. He began removing cobwebs from the ceiling, sweeping the floor and washing down the courtyard. By the time he was done, he had already missed the Eid prayer. He was ordered to stay and serve the day’s guests with water and tea.

The farmer bit his tongue, cursed under his breath and obeyed. This wasn’t the first time. He has unloaded sacks of cement, demolished a building and done construction work for his landlord in the past. When he walked the three kilometres home after sunset, his pockets were as empty as when he began the day. This free labour is routine.

Gada, a quiet, somewhat sullen young man with dense, curly hair and a short temper, has been planting and harvesting rice and wheat on this land ever since he started helping his father when he was 10. The landlord, a politician and rice mill owner, has about 100 acres of land and dozens of farmers at his beck and call.

Poor farmers are at the mercy of their landlord’s whims.

Gada rises every day before dawn and opens up his pigeon hovel, fills up their grain and water containers and lets two dozen of them free. He stands there for a few moments gazing up at the sky. This is one time during the entire gruelling day that Gada’s eyes soften and joy fills his heart.

There’s little time to enjoy this sport. Soon enough, he grabs his scythe and heads to the land, dressed in a faded dhoti and a kurta without buttons. There he chops up a bundle of grass, collects stacks of hay for his two buffaloes, checks on his standing crop and then returns home where his pregnant wife helps him unload the donkey cart and then serves him a breakfast of potatoes and leftover rice.

In the last two seasons, the land he farms, produced 200 maunds of rice and 50 maunds of wheat — which according to custom are split half and half between the farmer and the landlord. Gada is responsible for paying for the tractor that ploughs the land, the seed, the fertiliser used for the seed and the labour for planting and harvesting. The landlord shares the cost of the fertiliser for the crop and pesticide and pays one-fourth of the thresher charges. Since Gada has no cash upfront, he has to buy seed and fertiliser on credit which increases the cost by over 60 per cent because of interest charges.

Gada spends all year caring for his crop. He plants the seed for his rice crop in the intense heat of June and makes several rounds to the fields late at night to check on the water level.

On the last day of the rice harvesting season, when the thresher machine arrives, Gada is filled with nervous excitement. It’s the day of reckoning. His wife and other women in the family cook up a large meal for the labourers while he arranges cold drinking water, tea and cigarettes for them as well as a clean rilli for the landlord to sit on so he doesn’t spoil his starched white clothes.

The cleaned crop is spread in a round heap and then the traders begin weighing the crop. On one side of the scale sit the landlord and his assistants. On the other, stand Gada, a cousin and a couple of farmers acting as witnesses. Gada scoops up every last grain and tosses it onto the pile so the weight is higher. His gaze is fixed on the landlord; if he’s unhappy with the output, Gada will have to brave his rage.

When the accounts are prepared two weeks later, Gada comes out Rs8,000 in debt which will be carried over to the next season. Gada comes home with nothing after months of toiling in the heat; still, he must do it because it affords him animal fodder, a loan in times of need and access to rice and wheat he couldn’t afford to buy.

Not all landlords are the same. Some take care of their farmers, realising that their own lives and fortunes are tied to that toil. They don’t charge interest on loans taken for seed or fertiliser and don’t use their farmers as free labour.

But for Gada, if he is summoned, he must go. If he doesn’t, he risks losing the right to farm that land which means he won’t be able to feed his family. The last time he spent the day as a construction worker without a wage at his landlord’s house, he went hungry because the group of five workers wasn’t given enough food and had to get through the day without tea. He came back so angry, he threw his scarf on the floor and pledged never to go back. Then when his sweat dried, he realised that he had no choice. So this Eid too, Gada will be on standby, hoping he can stay with his three kids, but prepared to go if he is summoned. That’s just the way it is.