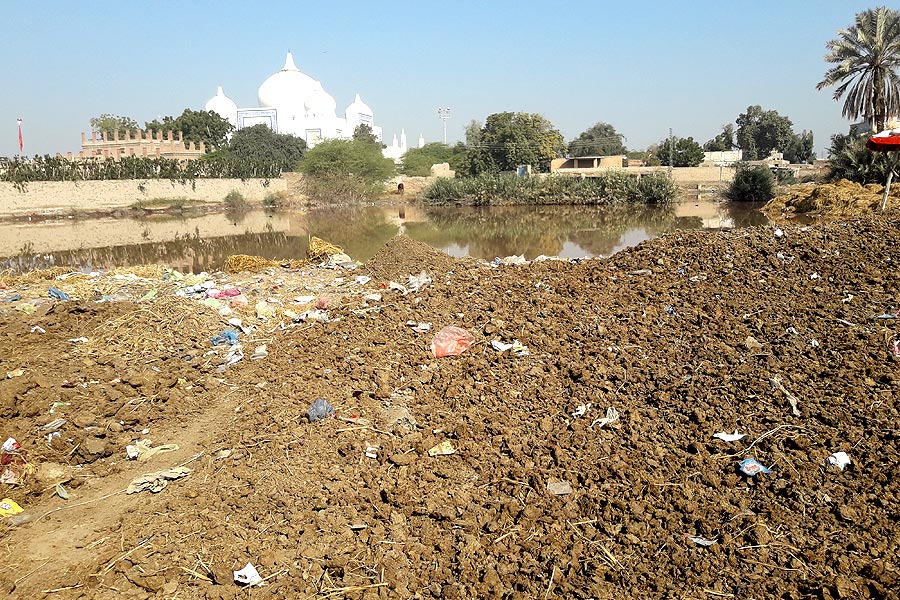 Marjan, a mother of six, and her husband, Mumtaz Ali, an unemployed driver, live in a mud hut with a thatched roof held up by tree trunks. Inside, a plastic bag holding a few tomatoes and a few sprigs of cilantro hangs on a nail, and along the walls the couple have displayed the few steel utensils—cups, plates and bowls—that make up their family wealth.

Like many of the few hundred homes in Marjan’s community, the house has no toilet. Marjan’s bathing area is at an open-air, rusty hand pump that draws water from the ground; she’s been collecting bricks around it, hoping to build walls one day. Her kitchen is a tiny patch of land shaded by a discarded political banner where she squats over a fire fueled by buffalo dung as she cooks rice for her children.

For Marjan and Mumtaz, Garhi Khuda Baksh, the ancestral village of the Bhuttos, Pakistan’s famous political dynasty, is home. And has been for generations. For the Bhuttos, this is little more than a family graveyard.

The dusty village, dotted with weary hawkers selling snacks and roadside tea shops sporting rickety wooden benches, is framed by an enormous white marble mausoleum with three domes and several doorways. This is the final resting place of Pakistan’s assassinated Prime Minister Benazir Bhutto; her father, Zulfiqar Ali Bhutto, also a prime minister; and his two slain sons. It’s the place where Benazir Bhutto’s husband, former President Asif Ali Zardari, and their children visit by helicopter or motorcade on death anniversaries. They are whisked in and out, surrounded by heavy security, spending no time in the village itself.

Outside the mausoleum, dozens of buffalo graze beside a large open pond of sewage buzzing with mosquitoes and surrounded by heaps of garbage. A woman pries dried cakes of buffalo dung off a wall to fire up her kitchen stove. Stray dogs scavenge in a pile of trash. Three idle young men munch on bright red carrots at a street corner.

“We have nothing, we own nothing, we are nothing,” says Jinsaar, a 24-year-old laborer in the village who earns a daily wage of about $3 when he can find work. “The Bhuttos haven’t given us anything. We still vote for them because we’re from their village, but we have nothing. We spend all day whiling away our time and wondering what we’re going to feed our families tonight.”

Pakistan has been ruled by the military for about half its 70-year history, and the Bhuttos have governed during several spells throughout the years of democratic rule. Yet living conditions for ordinary Pakistanis, even in the Bhuttos’ own village, let alone in the rest of the country, remain abjectly poor. As the nation prepares to go to the polls this year, the Bhuttos’ past failure to improve conditions is sure to hang over the political family.

Pakistan frequently appears in the international media because of its volatile politics, violent terrorist attacks and troubled relations with neighboring India. Within the country, though, the majority of Pakistanis contend with the same mundane issues they’ve struggled with for decades, including frequent power outages, unemployment and an ineffective education system.

Pakistan made the global news in January when President Donald Trump tweeted that his country “has foolishly given Pakistan more than $33 billion in aid over the last 15 years, and they have given us nothing but lies & deceit.” However, South Asia’s second-biggest nation has lost more than 62,000 people and incurred $123 billion in economic losses since it became a front-line ally in the U.S. war on terror after 9/11, according to the Pakistani government.

When Zulfiqar Ali Bhutto, an Oxford-educated feudal landowner from the Sindh province, started the Pakistan Peoples Party (PPP) in 1967, his slogan of Roti, Kapra aur Makaan (food, clothing and shelter) created a phenomenon never before seen in the country. People were drawn toward Bhutto’s emotional and charismatic speaking style as well as his welfare-oriented party manifesto, and for the first time, the public became aware of the right to a better life. The party won an outright majority in the first general elections three years later, and the PPP went on to become the sole truly national party with representation across the country.

In 1971, Bhutto became the fourth president, and he was made prime minister two years later. He started Pakistan’s nuclear program. In 1979, under the dictatorship of military leader Zia-ul-Haq, Bhutto was charged with murdering a political opponent and hanged. Many neutral observers considered Bhutto’s trial proceedings unfair.

Haq was killed in an airplane crash in 1986, and two years later, Bhutto’s daughter Benazir was elected as Pakistan’s youngest prime minister, at the age of 33. The country was buzzing with euphoria at the election of a young, progressive leader and the return of democratic rule. She had been groomed for politics by her father and was an astute politician. But Benazir Bhutto’s first term ended in two years on corruption allegations. She was re-elected in 1996 and three years later was ousted on similar charges. She received—but didn’t serve—a five-year prison sentence. After she spent eight years in self-imposed exile, President Parvez Musharraf granted her amnesty on all corruption charges.

In 2007, Benazir Bhutto returned to Pakistan but was assassinated two months later at an election rally in Rawalpindi. The PPP swept the elections in 2008 in an outpouring of sympathy, but five years later the party retained power only in the Bhuttos’ home province, failing to achieve substantial wins elsewhere. The Sindh province is home to 50 million people, more than the entire population of Spain or South Korea.

The party is now led by Oxford-educated Bilawal Bhutto-Zardari, the oldest of Bhutto and Zardari’s three children, who plans to seek a parliamentary seat for the first time this year. The PPP currently has 47 out of 342 seats in Parliament and runs the provincial government in Sindh.

“Bilawal has become leader of a party where his father shares the steering wheel and in many cases controls it,” says Murtaza Solangi, a talk show host in Karachi who has covered the Bhuttos for several years. “In order to become a truly national leader however, he has to earn it, just like his mother and grandfather. He has just started the journey. There are no short cuts.”

Zardari’s political career has been tainted with corruption allegations, and while serving as a federal minister in the 1990s, he earned the nickname “Mr Ten Percent,” referring to the cutbacks he allegedly took on government contracts. Zardari has never been sentenced in court but spent several years in jail on allegations.

In an interview with India Today in January, the 29-year-old Bhutto-Zardari said: “Pakistan needs a progressive alternative to the populist hate-driven voice of the two other mainstream political parties. PPP has always been a progressive force in Pakistan, and I feel that’s the way forward and that’s the sort of politician I’d like to be.”

Bhutto-Zardari has 2.46 million followers on Twitter and uses social media to make statements about his party’s successes. Unlike his mother, he was never trained for politics and instead led a protected life overseas. He learned Urdu, Pakistan’s national language, after being put in charge of the party following his mother’s death.

“My mother was assassinated. I didn’t choose this life, it chose me,” he said in the India Today interview. “It is absolutely something that was thrust on me. At the same time, for a son to be working on his mother’s lifelong mission, I get great motivation and solace from that.”

Media images of Bhutto-Zardari hugging elderly women from impoverished families are common, as were such images of his mother, the first woman to lead a Muslim nation. He said in a statement in January that a program supported by the Sindh government had lifted more than 600,000 families out of poverty since 2009 and would help another 2 million by providing interest-free loans to women.

However, commentators say the PPP’s achievements don’t match the public images. ”Benazir did guide her party toward policy that took into account the issues of the poor, but the lower tiers of leadership served their own interests rather than those of the masses,” says Mushtaq Rajpar, a columnist in Karachi.

Pakistan’s general election scheduled for July will mark the third consecutive democratically elected government, a first for the country.

With approximately 185 million citizens, Pakistan ranks 147th out of 188 countries in the Human Development Index,, which evaluates factors such as health, education and standard of living. “As much as 40 percent of the Pakistani population—roughly the size of the population of Florida, California and New York combined—live beneath the poverty line,” according to The Borgen Project, a Seattle-based nonprofit that fights global poverty. “Grinding poverty and lack of development fuel child labor, illiteracy, religious extremism and endless conflicts on massive scales,” The Borgen Project said in a statement in July.

Critics question whether Bhutto-Zardari would improve this scenario. “What has the PPP done in the past 40 years when they came into power in the 1970s, the 1990s and later on that they will do something now?” says Raoof Hasan, who heads the Regional Peace Institute in Islamabad. “It is impossible that Bilawal will alleviate the miseries of the people in his own area. He doesn’t know how these people live from morning to evening. All leaders in Pakistan do politics in the name of the disenfranchised and the downtrodden, but no one works for that majority.”

Qurban Ali, who appears to be in his 60s, lives in a mud hut in Garhi Khuda Baksh and spends every day selling rice from a pushcart. ”My family has been in this village for generations just like the Bhuttos,” he says. ”Yet I’ve never met any of them. I struggled to make sure all my boys got an education, but none of them was able to get a job. When we meet the Bhuttos’ representatives we touch their feet and offer our turbans [as a gesture of respect], but they barely even shake hands before dismissing us.”

Like Qurban, many residents of the Bhuttos’ ancestral village still say they’ll vote for the PPP. Most residents of rural Sindh are landless farmers working on the farms of rich feudal landowners, who happen to be politicians. Since they have no other source of income, these farmers remain tied to the land and therefore to its owners.

“The Bhutto name still carries a lot of weight in Sindh because of the sheer helplessness of people and as a matter of habit,” Hasan says. ”If you free people from economic captivity, the Bhuttos won’t stand a chance.”

Marjan, the mother of six, says she has made several trips to the nearby town of Naudero, where the Bhuttos have a fortresslike house, but has never been allowed by staff and security to meet any of the Bhuttos, who she hopes will solve her problems of impoverishment. ”They’ve never walked these streets or seen how we live,” says her husband, Mumtaz. ”Unless they see this poverty, how will they ever understand it?”