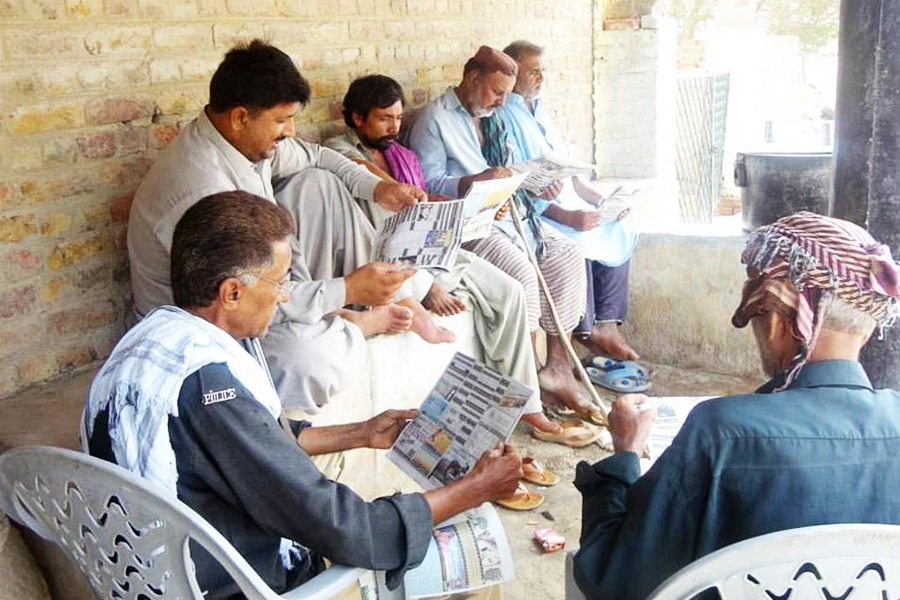 I RECEIVED an e-mail this week from a journalist colleague who lives in a Chicago suburb. He was relating how he got a letter from the local office demanding that he fix his roof and his tilted garage door in order to keep up the community standard. He went on to say that he had been planning to carry out some house repairs for a while for this same reason but had not yet got around to doing so. This little tale got me thinking about the notion of community sense, something that can be both puzzling and fascinating. After all, how many of us have not been frustrated that our neighbours are negligent when it comes to disposing of trash properly?

While in a village in Sindh recently, I had wondered why there were rubbish heaps right under communal garbage cans. Why would someone who lived and worked in this settlement throw candy wrappers and empty matchboxes on the ground, clogging up the open sewerage drains that were already overflowing? I asked around. Two young men told me they threw trash everywhere because everyone else did it too. A teacher said she does the same because no one stops her. And a schoolgoing teenager said he has always seen his elders do this, so he just follows them.

Likewise, I noticed a quaint little travellers’ shed on the main road that had fallen into a state of disrepair. It needed thorough sweeping and a little cement to fix the benches. I asked the people there why they did not feel the need to attend to this minor task. One man said it was not his duty, another said he was too busy with his own life to do this task and a middle-aged woman said she could bear the discomfort and dirt because she had to sit there only for a few minutes.

If villagers band together influence can be created and their needs met.

On the other hand, in village life, it is commonplace for the entire male population to rush to the scene if anyone sounds an alert at night that a cattle thief is on the prowl. Likewise, if there is a medical emergency in the middle of the night, several volunteers show up to help. I asked around about this too. The answer was almost uniform: any of us could be in that position ie having had a buffalo stolen or a child who had a dangerous fall. In that, therefore, there is an underlying individual interest.

What then accounts for this absence of community sense?

How then can we help foster a sense of community among village residents to ensure at least cleaner streets, healthier sewerage systems and public convenience? Certainly, village residents seem to fit the theory: they all belong to the same group and do share a sense of belonging; if they band together influence can be created and their needs met. Through their ties to the homeland, they share an emotional connection as well. Perhaps what is missing is the awareness of the power of community, the fostering of habit and a sense of ownership.

One way to create this is to begin in schools and introduce citizenship training and the concept of community sense at a young age. This must be done consistently and continually using creative, interactive and competitive techniques and practices. The second could be to work through women’s groups and families to generate awareness of the individual benefit for the greater good.

If, for example, your gutters aren’t overflowing, you will have a lower incidence of malaria and spend less money on getting your sick children treated. A third may be to motivate the youth to start community groups that can train others in what community sense and ownership mean and in how they can be used to generate influence and get tasks done for the collective good of the residents.

Using different groups and training techniques, people can be made to see that evolving a sense of community and working together for the development of their villages and towns will help them extract what is rightfully theirs from the government and that owning and caring for public assets will benefit their families for generations to come.

It is interesting to consider just how much good can come if we can create something as simple as a sense of community.