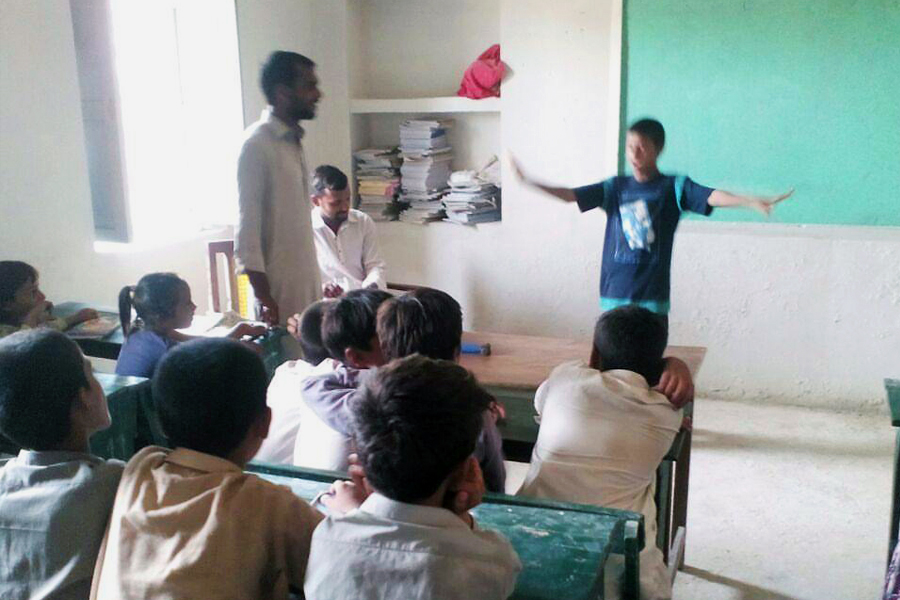 IN the last few days, I had occasion to witness the work of government teachers at three schools in Larkana district.

At a boys’ primary school, a government teacher in connivance with a local landowner withdrew government funds from a school bank account; he gave Rs3,000 to the landowner as a bribe, another Rs3,000 to the education department clerk to process the approvals and kept the remaining Rs5,000 himself. These are funds allocated by the government to be spent on the school building and facilities. The school in question is located in an agricultural field where there is no electric grid; the Rs11,000 the teacher embezzled would have been enough to pay for one solar panel and two pedestal fans for the two-room school.

At 9am on a school day at a boys’ high school, about 70 students were roaming the corridors, playing games on their mobile phones or sitting chatting in the playground. Inside the headmaster’s office, seven male teachers, all in their 40s and 50s, sat before plates piled high with sweets while the school’s peons served them several cups of tea. When asked about the timetable and which teacher was due in which classroom, the headmaster, whose monthly salary is Rs105,000, looked up with a blank expression, as if the most incomprehensible and irrelevant question had been asked.

There is no penalty for teachers’ acts of gross negligence.

A few days later at the sam e school, the same group of teachers arrived in the morning, marked their attendance and then headed out together leaving dozens of students in unsupervised classrooms. Where were they headed? A meeting of the teachers’ union that could not be missed and was far more important than teaching.

At a girls’ primary school, an experienced middle-aged teacher was cross about having been marked absent when she didn’t show up. After all, she demanded, why couldn’t she just be marked as on casual leave? At the same school, three teachers bribed or used political pressure to be transferred elsewhere because here they were being asked to show up on time every morning.

The penalty for all these acts of gross misconduct and negligence: nothing. To the contrary, taxpayers’ money is being drained on these incompetent and corrupt individuals who receive salaries ranging from Rs25,000 to over Rs100,000 compared with the Rs4,000 to Rs7,000 non-profit organisations pay teachers in the same area. These low-paid teachers are punctual, regular and committed to their students. Where does the difference lie?

First, these government teachers have been bred in a system of zero accountability where everyone from an office peon at the education department to supervisors and officers are accustomed to receiving and giving illicit payments and political favours to avoid duties. Second, years of this corrupt system has led to a complete breakdown in the collective conscience of government employees and the society in which they operate. Third, the end-user — in this case the students and their parents — have no recourse when they are not provided what is rightfully theirs.

The Sindh education office has installed a convenient mechanism whereby one can send in a complaint about a teacher or a school via text message. It remains to be seen if there is any timely and visible action taken in response to the complaint.

More needs to be done. First, every district must create a complaint window at the education department office. There is plenty of staff that can be trained for this. Here, the public may be given an easy way to lodge a complaint against a teacher or a school. These complaints should then be turned around in a short and clearly identified period of time; field inspectors should be sent to the schools to verify information provided in the complaint. And district education directors should be empowered to take immediate disciplinary action that should also be duly communicated to the complainant. The district office should be required to submit a monthly report to the education secretary’s office detailing how many complaints were received and resolved.

District education departments should also be required to build liaison with local communities who can act as watchdogs; serving as both a pressure group that exerts force on government teachers to perform their duties and as a monitoring body to ensure the smooth functioning of the school. For starters, school management committees should be run by parents and members of the community rather than by the principal of the school.

As the quote goes, a good teacher is like a candle that consumes itself to light the way for others. Far from consuming themselves, our government teachers are glad to consume everything in sight, shun their duty and darken the path of our children’s future. The education department must act now.
The writer is a journalist, media trainer and founder of Ali Hasan Mangi Memorial Trust. She can be reached at mt@alihasanmangitrust.org