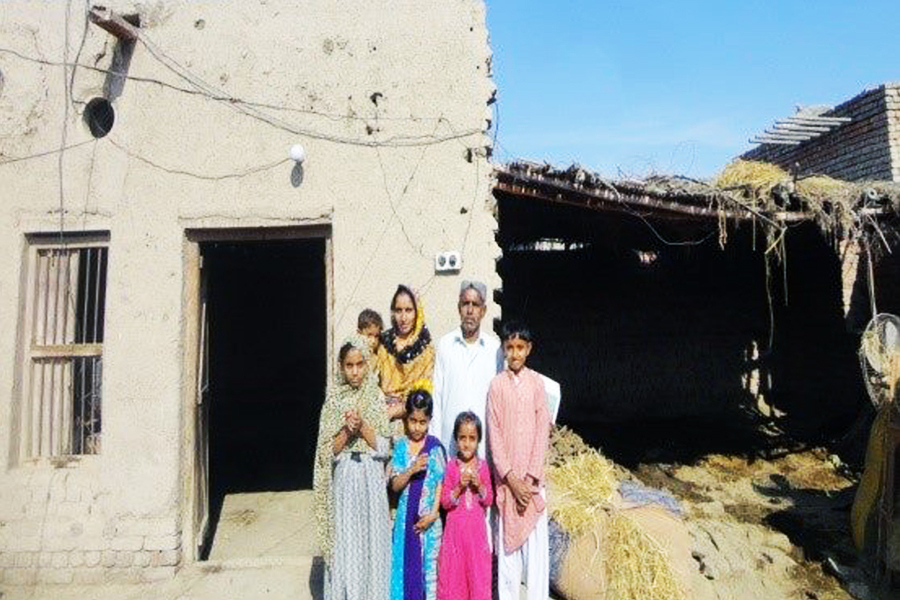 IF you met Ghulamullah on a train or at a bus stop and got into a casual conversation with him, you would think him to be a happy and contented soul. For his tiny stature, he speaks in a loud, booming voice, barely gets through two sentences before cracking a joke that stirs up the most serious conversation, and readily offers his opinion with an air of great expertise.

A visit to his village home outside Larkana city, however, reveals his true life struggle. A patchwork quilt serves as the doorway into a muddy patch of uneven land. In one corner, a buffalo feeds lazily out of a trough. Nearby, two goats scratch themselves against a wall. Under an open area thatched with hay, Ghulamullah’s wife Zarina squats in a corner over a pot of brewing tea, a two-year-old hanging off her lap.

Four of their older kids play in the mud, arguing over a one-armed, dusty teddy bear. Forty-year-old Ghulamullah, dressed in a threadbare kurta and a lungi, throws himself on a rickety charpoy, frequently wiping his brow with a scruffy scarf thrown upon his shoulder.

One of five brothers and two sisters, this labourer grew up in the same poverty he now lives in. His father and brothers also worked as farmers or casual labourers. Ghulamullah never went to school and began working from a young age, sowing rice or toiling on construction sites. He remembers earning Rs70 a day when he first started; over a quarter of a century later, he still brings home just Rs350 a day — that is if he finds work.

Zarina and Ghulamullah are battling life on their own.

Ghulamullah was married off to a cousin in his late 20s. For want of space in the family home, he was packed off by his father who gave him the tiny piece of land he now lives on. There were no rooms, no boundary wall, toilet, kitchen or fan. Ghulamullah’s wife brought with her a couple of gold trinkets that they sold and made a makeshift room of unbaked bricks and a roof held up by a date palm, which gave in within six months.

Zarina realised early that it wouldn’t be possible to improve their lot unless she also took part. She scraped together from her husband’s daily wages until she collected Rs1,000 and then started buying fried pappadams wholesale and selling them to village shops. She did this dutifully for two years saving up the profit to buy fabric that she brought to the village and sold door to door. She took out a small loan and slowly increased her trade, counting on her fingers since she never learned to read. With the profits, she started on home improvement.

First, she bought a hand-pump to draw subsoil water; this prevented her from having to carry buckets to and from her neighbour’s house. She then bought a water motor followed by a television on instalments. After she paid that off she bought a washing machine.

Ghulamullah spent the wheat and rice planting and harvesting seasons working on farmland for a paltry Rs150 a day or going to construction sites where he earned a little more. When he worked days at a time in summer temperatures he would often collapse, return home ill and be unable to work for weeks. When flour stocks ran low at home, he would head out once again, well or not.

His family ate a staple diet of rice, chapatti and potatoes. Anything more was a rare treat. But when their three-year-old daughter fell ill and they rushed from one hospital to the next to seek treatment, their already shaky finances collapsed. They lost the child; the rest of the family was near starvation. Without the luxury of mourning, Ghulamullah hea­ded back to work.

Frustrated with the scarce availability of work, he even ventured to Iran with two cousins, undertaking an arduous six-day journey by bus, wagon and foot, escaping immigration officials and braving rugged mountains.

He worked on rice fields for several months after arriving in Iran and saved up Rs100,000, which he immediately invested in the buffalo he still owns.

Zarina and Ghulamullah, like all Pakistan’s labourers, are battling life on their own. Whether it’s income, shelter, basic facilities like a toilet or water, healthcare for their family, they’ll get it only if they struggle for it themselves. Like all of us, they too aspire to a better, more comfortable life and a brighter future for their children.

Today, their three biggest hopes are to build a kitchen, a bathroom and reconstruct a safer room to live in. Once these are done, they’re daring to hope they’ll be able to save up for a fridge. They’ve put their kids in government school, hoping an education will make their struggle a little easier than their parents’ has been. The lines on their smiling faces run way deeper than their years. Yet despite all this, they smile more, complain less and march on.